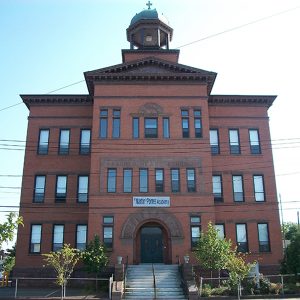 New Haven, CT – Allison Rivera, President of Saint Martin de Porres Academy announced today the purchase of the school’s existing building and surrounding properties on Columbus Avenue in New Haven.  Saint Martin’s has been renting the school building from Church of the Sacred Heart, part of the Archdiocese of Hartford, since it arrived in New Haven 10 years ago.  It is the former site of Sacred Heart St. Peter School.

“It has long been our dream to secure a permanent home in the Hill Neighborhood.  It is one of the most underserved in New Haven, and it is thirsty for opportunities and for community investment in its youth,” said Allison Rivera, President of St. Martin’s.

Funds for the purchase were raised from current and former board members as well as several long time friends of the Academy.  “We were overwhelmed by the very generous response of the small number of people who made this possible,” said Jay Bowes, the school’s Founder.

Saint Martin de Porres Academy is an independent Catholic middle school that provides a tuition-free, extended-day education to students with limited resources.  The Academy makes a unique 12-year commitment to support its students academically, emotionally and financially through middle school, high school and college, as it strives to break the cycle of poverty through education and opportunity.  The Academy’s very first 5th grade class who entered the school in 2005 graduated from college this past May.

Over the next year, a newly appointed Capital Campaign Committee of the Board will work to raise the funds necessary to make needed repairs to the 137-year old school building and create a playing field, which can accommodate the school’s many athletic activities. “Offering non-traditional inner-city sports like lacrosse, field hockey, baseball and soccer gives our students a leg up when they enter suburban prep schools where they are often the economic and racial minority,” Rivera stated.  “A playing field that can be utilized by the community when the school is not in session is a benefit to everyone.”

The members of the Class of 2025, who graduated from 8th grade on June 25th, were treated to a very meaningful Commencement Address given by Princeton Class of 2017 graduate, Kahdeem Cohens.  He was enrolled as a member of the first 5th grade class in 2005 where he and his classmates were referred to as The Class of 2017.  This year, the 12-year promise that the Academy made to them came to fruition.

Saint Martin de Porres Academy is a faith-based, NativityMiguel middle school that provides a tuition-free, extended day education for underserved girls and boys from low-income families in the New Haven area.  We are an independent Catholic school committed to a belief in the dignity and worth of every person.  We strive to provide each child with a promising start in life and to equip them to fulfill their academic potential while achieving spiritual and social maturity.  We welcome children of all faiths, races and cultures.

The vision of Saint Martin de Porres Academy is to break the cycle of poverty through education and opportunity.  Our goal is to provide urban boys and girls the opportunity to choose a quality education that will allow them to live up to their full potential.  At the Academy, we promote more than academic excellence – we cultivate personal responsibility, social skills and leadership, balanced with a strong spiritual foundation and recognition of the need to serve others.

See how we are
Transforming Lives!

Get all of our updates and news straight to your inbox!

Breaking the Cycle of Poverty

One Child at a Time