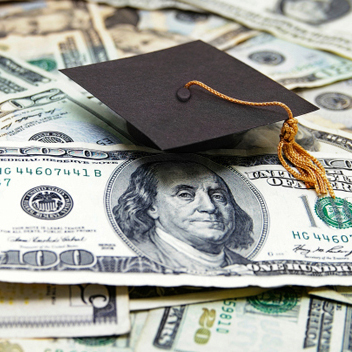 Undergraduates with exceptional financial need who have not earned bachelor’s or professional degrees are eligible to apply for federally funded Pell Grants. Most Pell Grants are awarded to students whose families make less than $30,000 annually. The maximum Pell Grant award possible is $5,920.

“With less money, colleges have less money to enroll lower-income kids. So some of them are going out and recruiting more affluent kids actively. Others are probably not admitting the lower-income kids. I find this really worrisome because investments in education, historically, have really paid for themselves. And the idea that we’re making it harder for lower and middle-income Americans to go to flagship public universities strikes me as really short-sighted and self-defeating.”

St. Martin’s Graduate Support Program helped our graduates secure over $450,000 in scholarship money last year which consisted of private scholarships and donor funded scholarships. This is another reason why your dollars and schools like St. Martin de Porres Academy are needed now more than ever.

See how we are
Transforming Lives!

Get all of our updates and news straight to your inbox!

Breaking the Cycle of Poverty

One Child at a Time